From conception to birth and beyond, a mother’s body goes through a combination of changes that cannot be compared to any other physical phenomena. While one can clinically describe these changes, they are no substitute for the real experience, both emotionally and physically. Despite this, we’ve attempted to cover the significant physical changes below, giving you some idea of what actually occurs to your body. In addition, we’ll touch on the emotional side of pregnancy.

After undergoing pregnancy, your body is significantly different than it was before. There have been hormonal changes and physical strain, such as the weight of a baby on your organs and skeletal structure. In some cases, women eventually return to their pre-pregnancy state. In most cases, however, women undergo noticeable physical changes that are not reversible with diet and exercise, leaving them frustrated. When women are left with an altered appearance, it can affect their self esteem. This phenomenon is very common among women who have been pregnant. If you have undergone physical changes that are affecting your confidence, you are in the vast majority of mothers.

Below are the significant changes that women may expect following pregnancy:

As the first and most obvious change, the breasts become enlarged during pregnancy because estrogen is telling the body to prepare for breastfeeding. Milk-producing glands multiply, concurrently becoming able to produce milk. This may cause the breasts to feel firm and tender.

During the final weeks of pregnancy, the breasts will begin to create colostrum, which appears as a yellowish and milky liquid. Colostrum is also produced directly after delivery before breast milk. It contains many minerals and antibodies, which are the first meals for a baby who is breastfed.

After pregnancy, the breasts are at the height of their engorgement. Once a mother is done breastfeeding, her breasts will begin to slowly shrink, as there is no need for the extra glands.

This combination is often what most women present with:

Some other, smaller changes may concurrently occur:

The abdomen is affected in two primary ways after pregnancy:

The better-known change is the fact that the stomach skin stretches significantly during pregnancy. Depending on the resilience of one’s skin, it may not retract completely, or at all. This leaves one with a sagging envelope of skin in the belly, despite a potentially tight core.

The other change is in the abdominal muscle wall. As the baby grows, the rectus muscles are subjected to quite a bit of pressure, often stretching beyond the body’s ability to keep these muscles together in the midline. This phenomenon is called diastasis. These separated muscles lead to bulging of the abdominal wall, thereby contributing to a “poochy” appearance in the belly. Even if one’s skin has retracted after pregnancy, the stomach will still protrude if one has this diastasis, thereby giving a barrel appearance when the abdomen is relaxed. Unfortunately, while exercise can help tighten the overall abdominal musculature, it cannot bring the rectus muscles together once separated.

In addition to the above, the stomach can also develop stretch marks, which is a very frustrating phenomenon. The truth is, there is no real, good explanation regarding their cause. Unfortunately there is no solution for stretch marks, despite the numerous marketing ploys. Only those stretch marks that are within the area being excised during a tummy tuck can be eliminated.

During pregnancy, there are many reasons for weight gain. First and most obvious is the baby, who can account for anywhere from 6 to 8 pounds. Your breasts may increase as much as 2 pounds in preparation for breastfeeding. Another 6 pounds can be tacked on for the enlarged uterus, placenta and amniotic fluid.

While the above sources of weight gain are fleeting, the body also stores fat during pregnancy, which may not be as fleeting. After pregnancy, this fat can turn into stubborn pockets that won’t budge with diet and exercise. The good news is this stubborn fat can usually be eliminated with selective liposuction.

Following pregnancy, many women feel their pubic area, also known as the mons, has become fuller and sagging. This is quite common, as when the abdomen stretches during pregnancy, there is a lot of force in this region. Much like the abdomen that may not recoil to its normal anatomy, the mons is also subject to the same predicament. If you are to undergo an abdominoplasty, it is crucial this area be rejuvenated concurrently and not as an afterthought.

In addition to the pubic region, many patients also note that their labia have also become stretched and enlarged as a result of pregnancy. This can lead to embarrassment and discomfort during exercise and intimacy. A labiaplasty may be performed in order to rejuvenate or correct this appearance.

The miracle of pregnancy and childbirth can sometimes be clouded by the tremendous effort women go through during the process. There’s no question that pregnancy is a roller coaster ride, with many highs and lows. At the end, women should have nothing but a feeling of total accomplishment and pride, having gone through a 9-month process that no man will ever have to endure. Unfortunately, this doesn’t always occur.

During and after pregnancy, feelings of sadness are completely normal. Such feelings are likely due to the massive hormonal changes occurring in the body. Despite these feelings, it is of course important to maintain care for one’s self and not lose sight of the fact that you are still an individual, not just a mother.

It’s been found that emotional changes can be directly linked to physical changes a mother has undergone. While a new mom may rigorously use diet and exercise to get her old body back, these actions won’t necessarily correct her perceived cosmetic issues. This can lead to quite a bit of frustration, feeling she can never have the body she wants.

Additionally, there is the fact that one must take care of her child. With a new life in her hands, she may feel taxed and fatigued from the effort put forth. With all this newfound responsibility for a baby, mothers may feel selfish for thinking about themselves every once in a while. Despite this, it is important to keep in mind that you are not doing your baby any favors by depriving yourself of your own pleasure. That being said, it is important to elicit support from one’s partner or family throughout the journey, ensuring that one is able to actually enjoy life and her baby.

« What is a Mommy Makeover? The Decision » 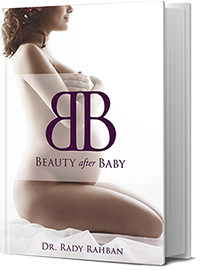 MESSAGE FROM DR. RAHBAN REGARDING COVID-19

Hello everyone. I hope everyone is doing well, staying safe, and going through this pandemic and all of its required changes the best way possible.

We are excited to have the office back open and be able to deliver full surgery. To accomplish this, we have and are continuing to evaluate the best way we can serve our patients with regards to social distancing, testing, and other safeguards.

We love what we do and especially love taking care of our patients in the best way possible. To accomplish this, especially in these times, requires good communication, good planning, and the drive to do better. With that in mind, we will continue to listen to you, the state officials, and the community to make sure we stay up to date on the best way to provide the service that we are used to providing and to do so in the safest way possible.

If there are concerns, desires, and recommendations that you would like to share with us please feel free to call or email us. For consultations, we continue to offer both virtual consultations and in-person consultations.

We will continue to get through this together. Stay positive and stay safe.